It’s getting warmer here in Sitapur, so Diane and I have bought bicycles and I’ve been tentatively venturing out of my sleeping bag. Up until now, I’ve been huddled with my computer and kleenexes, trying to get a handle on the statistics of India’s Total Sanitation Campaign.

I recently learned, slightly to my horror, that some people read this blog. Hello, there! Those of you who have read a few posts back might remember my claim that poop is among the most dangerous things people make. Luckily, India’s Total Sanitation Campaign might be doing something about it.

The Total Sanitation Campaign, according to statistics on its website, has seen built about one household latrine per ten residents of rural India, over the past ten years or so. It’s intended to be a comprehensive rural sanitation program, combining household and public latrines, community campaigns, rural sanitary marts, and a prize to village leaders for an “open defecation free” village.

I’ve been looking at the TSC through a few data sources: the Indian census, the IHDS, and the DLHS. Sometimes I’m comparing districts where the program was more intensive with districts where it was less intensive, and sometimes I’m comparing children born in times by which more latrines had been built with children born in times and places with fewer latrines. If you’re interested in the statistical details, you can see some notes I’ve typed up in our research section.

The basic idea can be seen in this picture. The vertical axis is the change in the infant mortality rate from 2001 to 2011 in 280 Indian districts. The IMR is, more or less, the fraction of babies who die before turning one year old, multiplied by 1000. So, -20 means two percentage points fewer babies die than did 10 years ago. The horizontal axis is how many latrines were built per rural person. The average household has between 5 and 6 people, so very few districts built as many as one per household, and most did much less than that. 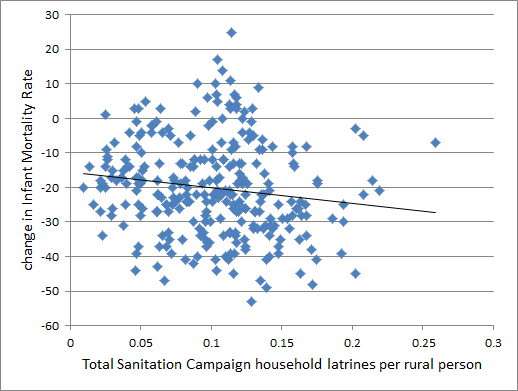 The line that best fits these points has a downward slope, indicating that on average IMR fell by more in districts where the program was more intensive. However, even if this is purely an effect of the program, not all of this is exactly because of household latrines: the program did more than just build latrines.

But the main work of the analysis is trying to assess whether this correlation does reflect an impact of the program. This can be hard to be certain of, but some evidence is that:

This is all very much a work in progress, and I would be quite interested in the thoughts of anyone who wants to pick apart my analysis, or threaten me with a story of a lurking statistical problem.

What I hope to do next is use this apparent effect of the TSC to see if in places with improved sanitation and, as a result, less disease, people eat fewer calories. Very, very preliminary evidence points in that direction. If true, this would indicate (as Deaton and Drèze suggest) that, in addition to making people sick and killing babies, the Indian disease environment requires people to eat more to make up for calories lost to disease.