‘Marital and other rapes grossly under-reported’

Rukmini S. of The Hindu published an article today about Aashish’s new study on under-reporting of violence against women in India. 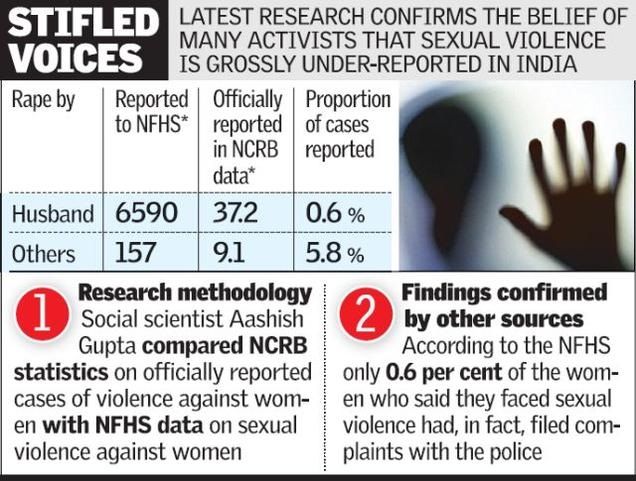 Husbands commit a majority of acts of sexual violence in India, and just one per cent of marital rapes and six per cent of rapes by men other than husbands are reported to the police, new estimates show.

In keeping with the widely held belief among women’s rights activists in India that sexual violence is grossly under-reported, social scientist Aashish Gupta with the Research Institute for Compassionate Economics compared National Crime Records Bureau (NCRB) statistics on officially reported cases of violence against women with data from the National Family Health Survey (NFHS), which asked women respondents whether they had faced any sexual or physical violence.

Since the most recent round of the NFHS was conducted in 2005, Mr. Gupta compared the NCRB statistics for that year with the extent of violence that women had admitted to in the NFHS survey.

For both marital and non-marital rapes, however, the officially reported figures were extremely low, Mr. Gupta said in a working paper he shared with The Hindu. Comparing the NCRB and NFHS data in 2005, just 5.8 per cent of rapes by men other than the woman’s husband were reported to the police, and just 0.6 per cent of rapes by the husband. Since marital rape was not recognised as a crime in India, it was probably reported as “cruelty,” Mr. Gupta found.

While India lacks a “crime victimisation survey,” which in countries such as England has largely replaced police statistics as official crime data, Mr. Gupta’s findings are confirmed by other sources.

The NFHS itself asks women who experienced violence if they reported it to the police; just 0.6 per cent said that they had.

The Delhi-based women’s rights organisation Jagori made similar findings in a sample survey in Delhi in 2011 — just 0.8 per cent of women who had been sexually assaulted, stalked or harassed reported it to the police. “There have been some area-specific studies like ours, but the NFHS is really the only victimisation study that India has,” Kalpana Viswanath, researcher and executive committee member of Jagori, told The Hindu. “Our recommendation has been for the NFHS to expand their questions on violence and look at sexual violence other than rape too,” she said.

Delhi has the lowest actual incidence of violence against women and highest rates of reporting in the country.

In general, States associated with gender equality — the North-Eastern States, Kerala, Tamil Nadu and Karnataka — had both lower levels of actual incidence of violence and higher levels of reporting, but no State reached double digits in its extent of reporting.

You can also read the full article here.