Which government programmes do people care about?

Its chart month on rice blog, and we are going to post a lot of charts in the coming weeks. This post has a crude graph about what do people complain about.

CGNet Swara is an award winning initiative that is active in some of India's poorest areas. If you have a complaint, you can call a toll-free number provided by Swara, and report your issue. CG Net Swara then makes your complaint available to callers (whereby it operates as a local news station for them), online, and also tries to forward it to competent authorities for action. Its about page says:

we have built and deployed CGNet Swara: a voice portal that enables ordinary citizens to report and discuss issues of local interest. To use it, they call a phone number using any mobile (or fixed line) phone. Callers are prompted to press "1" to record a new message, and "2" to listen to messages that have already been recorded. Once a message has been recorded from the field, professional, trained journalists, who access the system using a Web-based interface, review and verify the report. Approved reports are then made available for playback over the phone. The reports also can be accessed on the CGNet Swara website

My friend Inayat visited them in the past and wrote this cool article about it.

On its website, CGNet posts 5 issue per page, and they have 1011 pages with 5 issues per page, plus one page with just one: so that makes it a total of 5056 posts. Using the google custom search plugin on the Swara website, I found out the number of posts per issue. The following bar shows shows the results: 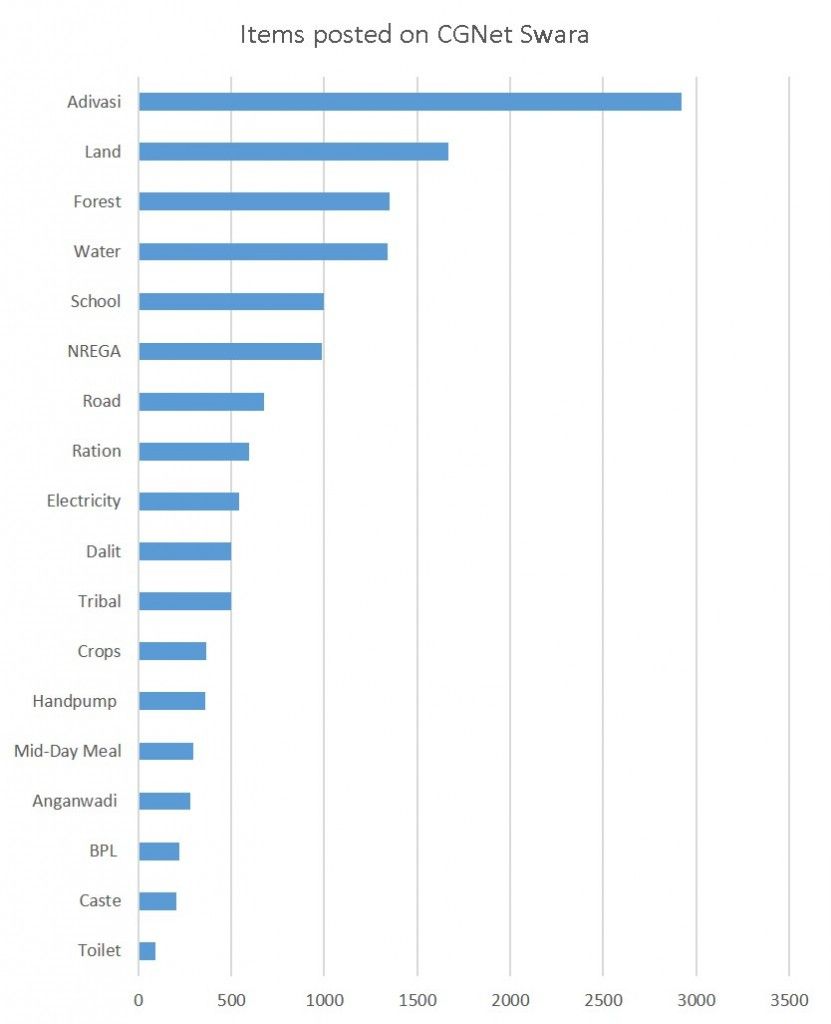 CGNet is active primarily in the tribal belt of the Gondwana region of Central India which is spread primarily in the states of Chhattisgarh and Madhya Pradesh, and hence, the term "Adivasi" is present in a very large number of posts. Similarly, adivasi concerns, such as land and forest, both of whom are in a precarious situation, appear to be the next big things people call CGNet Swara about.

NREGA, Ration, Electricity also figure prominently, which shows that people often have complaints about these programmes in these areas, but also goes on to show that these programmes are extremely important in people's lives and that they really care about them. I found it interesting that Ration, which provides greater benefits to a larger number of people than the NREGA, was a lesser concern than the NREGA in this region: One reason can be that the largest number of callers for CGNet are from Chhattisgarh, which, in the last few years, has shown a remarkable improvement in the Public Distribution System.

Unfortunately, toilets does not seem to be an issue of importance for people making calls to CGNet Swara at all: this is not because these states have everyone using a toilet. These places have some of the highest proportions of population defecating in the open. Nor is it the case that government programmes to promote toilets are working perfectly in these states - in general, these programmes have a lot of corruption and pilferage, specially in these parts of India where people are more powerless than others.

The issue, to me seems to be that people do not care that much about toilets, and open defecation is acceptable to many of them. To people who know the preliminary findings of the Squat Survey, this should not be surprising at all. Unfortunately, people in rural parts of India do not realise the disease consequences of open defecation in the open, and hence, continue to do so without worry.

One task that policy makers face is making people realise that open defecation is bad for health. Without that, change seems impossible.