The unsung praises of record keeping

About a week ago, as I was beginning to think about the "administrative records" section of a class that I could teach about collecting demographic data, I came across a photo essay by Jan Banning on Chris Blattman’s blog. The photo essay, entitled Bureaucratics, depicts low and mid-level bureaucrats at their desks in countries around the world. The first few photos are from Bihar, and the papers and computers strewn about dusty offices illustrate the disorder of many of the government record keeping systems in that state, and many other places in the developing world. This is regrettable, since, in principle, administrative records can help improve service delivery, inform policy makers and encourage and enable government and service provider accountability. 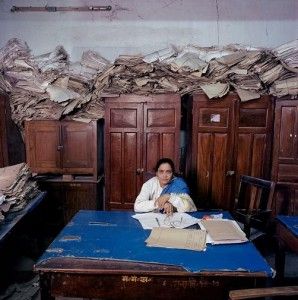 Administrative records in Bihar... and many other places.[/caption]

The issue of how to organize and store files is only one of the problems that places like Bihar will have to address if they are to use administrative records to their fullest potential. First, and foremost, more administrative records will have to be kept. Currently in India, cause of death is rarely recorded and very few people have medical records to which the doctors they visit can refer. Medical records aren’t the only records that are lacking. More data, and more readily accessible data, about state level purchases of grains for use in the Public Distribution System would have helped development economist Reetika Khera, author of an article in Economic and Political Weekly entitled “Trends in Diversion of Grain from the Public Distribution System,” better evaluate that important public program.

Even when records are created and organized, social scientists often worry about their accuracy. In a paper forthcoming in a book about the National Rural Employment Guarantee Act (NREGA) in India, development economists Clement Imbert and John Papp compare the number of person-days worked on NREGA, a rural public employment program, that were reported in the administrative records, to the number of person-days reported in a nationally representative household survey. There was an important discrepancy, in that the administrative records reported far more work than household survey respondents. While there are many plausible explanations for the discrepancy, this work reminds us that those who create administrative data often have incentives to do things other than produce the highest quality data. In the case of days of NREGA work, a local program officer may inflate the rolls in order to steal some of the payment, or a block or district level official may inflate the numbers to make it look like the program is succeeding in his district. Social scientists always need to examine the motivations of those creating administrative records before using them to explore social questions.

The International Records Management Trust has been working since 1989 to help developing country governments improve the creation, quality, use and storage of administrative records. They are also working to help countries transition to using electronic files. They hold trainings and fund archiving projects, and are even developing textbooks for African universities about the creation and maintenance of record keeping systems. I hope that they will be successful in spreading their message about the benefits of administrative records.