Dean Spears, John Papp and I have just wrapped up a first draft of a working paper about short term labor migration from a region on the borders of Rajasthan, Gujarat, and MP (using the same data that inspired the post from July 16). People from this region frequently leave their villages to work in cities, mostly as construction workers. They work hard, often in summer, when temperatures can reach up to 115 degrees Fahrenheit. Normally, they are paid between US $2.00 and $2.50 a day and most don’t have a place to stay in the cities where they work –either they sleep in the unfinished building they are working on, or outside. As tough as this life sounds, it is important to remember that the lives they live in their villages are also difficult. Most people in the survey lived in mud homes and had no electricity. In the rainy season, most of the households grow corn, a staple of their diets.

To look at one piece of our work in a bit more detail, I just wanted to share one of the graphs from the paper. 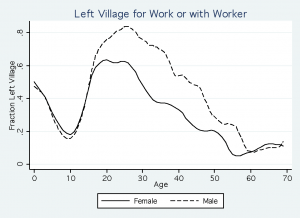 It shows the fraction of population that left the village for work, or to accompany a worker, in year prior to the survey. A couple of things stick out about this graph. The first is near universal migration among young men. Indeed, a closer inspection of the data suggests that it is only men who are sick or disabled, or those from the richest households who do not migrate. Whether or not the household has irrigation, and so can grow crops during the lean season, does not matter for whether or not that households sends a young male migrant. It seems like the benefits of migration for this population far outweigh the costs.

There is also a striking amount of migration among women – more than half of young women have migrated in the past year. Unlike for men, whether or not the household has irrigation does seem to matter for whether or not it sends a woman. Households which lack irrigation are more likely to send a woman, possibly because the benefits of migration no longer outweigh the costs when women have the opportunity to be agriculturally productive in the lean season.

Perhaps most striking is the fraction of infants who have migrated – half of infants have left the village to accompany a mother who migrates for work. I would like to know more about the impacts of this migration on children. Do mothers have less time to spend caring for their infants when they migrate for work? Or do they have more, since they tend to leave other children in the village with relatives? What happens when a child gets sick in the city? Do the outcomes tend to be better or worse than when she gets sick in the village? Or are they about the same? What are the costs and benefits of short term migration for babies? Our data can tell us a lot about the lives of short term migrants, but unfortunately we still don’t have the right kind of data to answer these questions. They are questions that I hope will spark the interest of new students of short term rural labor migration.