In fact, Sagar, Madhya Pradesh – where I have been watching the surveyors ask about toilets – is not any more horrible than the other districts where we have done the survey, but I could not resist the pun.

Yesterday, I accompanied an interview with a daughter-in-law in a Hindu brahmin household, situated among all the other pale blue brahmin households, near the large, tall temple in the middle of the village. Indeed, it is election season in India, and many of the houses nearby had stenciled paintings advertising one of the political parties that has long been associated with Hinduism-inspired policies.

In comparison with her village, this woman’s family was relatively well off (her father in law had an unspecified government job), and she made sure to let us know. It struck me that the interview was a fun (rare) opportunity for her to flaunt her education. When we asked how good the public schools are in her village, she made a show of not knowing: after all, her children go to private schools! When we showed the “life satisfaction” ladder and asked how her life was going, she practically bellowed that this was the best of all possible lives for her. When we asked “what is your religion,” she immediately answered “Brahmin!” 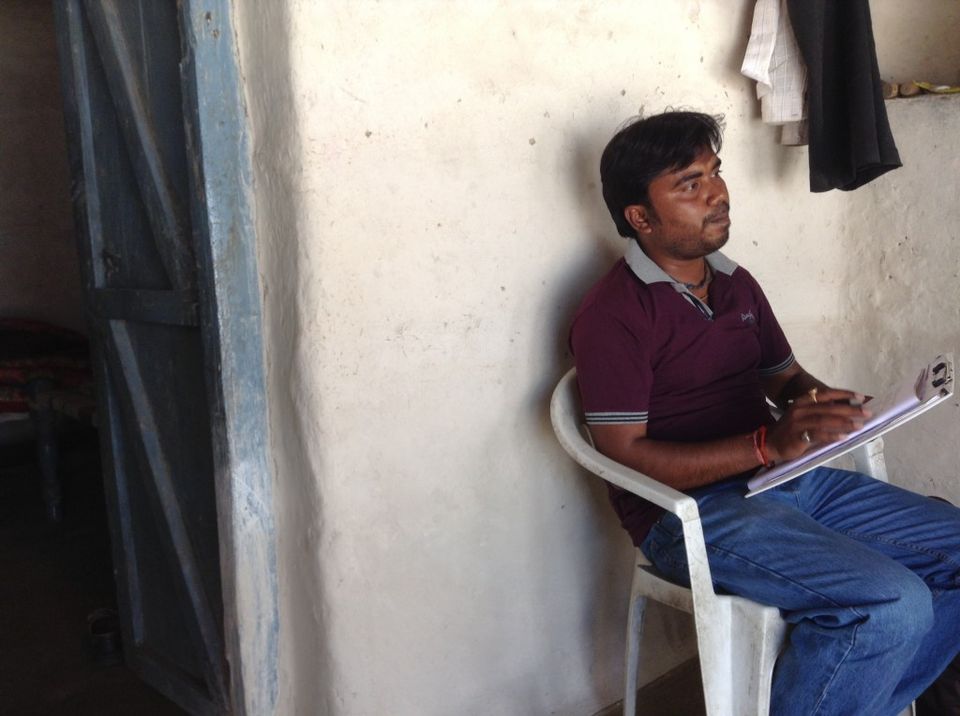 So, it is little surprise that her household has a latrine, although you have to walk out the back door and a little ways away to get to it. I saw the same thing in another brahmin house in the next village over that afternoon: a huge latrine-building about 30 meters out the back door, with two pits, each 10 feet deep. Our daughter-in-law interviewee twice explained that not only does everyone in their household use the latrine, but these days “everyone” has and uses latrines! Unfortunately, she probably does not get out and about much, due to social restrictions on young women, so it is interesting to reflect on how she learned this. Of course, there are many people in her village that do not use latrines. Another surveyor, randomly assigned to go in a different direction, interviewed two “Other Backwards Caste” households on the edge of the village, neither of which had latrines. A third interviewed a large household around the corner that, somehow, had two latrines – but only the 95-year old grandmother ever used one!

The daughter-in-law knew very well that using latrines is healthier. She found open defecation disgusting, but not so very disgusting: it would be much worse to have a dirty dog in her kitchen, or for a dirty person to go into a temple. (She gave no indication whatsoever of minding the cow in her kitchen.)

But when we started asking about religious purity, her answers took a different turn. I’m highlighting this in a blog post because it turns out to be a pattern that we see all the time. We ask these four questions:

The brahmin daughter-in-law gave a very common pattern of answers: pure, pure, not pure, not pure. In other words, what matters for religious purity is not whether you defecate in the open or use a latrine, but whether you do it far from or close to your house. This may be why her family’s latrine was some distance out the back door.

As long as people use them – a big “if” – I don’t see any reason why it would matter for health outcomes if latrines are right next to people’s houses or a little distance away. However, although the ones that I saw two weeks ago in Tamil Nadu did not have latrines, my understanding is that the simple houses that the government sometimes provides for poor people are supposed to have latrines built right in. It may be no wonder that people don’t agitate when their latrine money is stolen if it has to be pollutingly attached onto the house. Similarly, a government message I sometimes see painted on walls suggests: “don’t let your daughters or daughters-in-law go outside: build a latrine right in your house!” Could this be a counterproductive message?

update: Diane tells me that IAY houses are not, in fact, officially supposed to have the latrines attached, or at least not required to. April fools!