Purity, latrine use, and religion

From the SQUAT Survey, we found that many people prefer open defecation to latrine use, and that latrines are often seen as dirty and unpleasant. Through our conversations with people in rural India, it seems that part of this distaste is rooted in notions of purity and pollution: many expect latrines to emit foul smells, which are often seen as unhealthy and disease-inducing, and are averse to the periodic cleaning that pits require.

It is between latrine construction near the house and defecating in the open far from the house where there are differing opinions. The graph below shows the percentage of people who report each of these options as “impure” for respondents overall, just for toilet owners, and just for toilet users.

As we move from the overall sample, to those who own latrines, to those who actually use latrines, we see that more respondents report that open defecation far from the house is impure (from 42% to 51% to 59%), and fewer respondents report that latrine construction near the house is impure (42% to 39% to 37%). Of course we can’t know with our data which comes first – the ownership and use of the latrine, or changing beliefs around open defecation - but it is certainly interesting to see the connection between perceptions of purity and latrine practices in these trends. 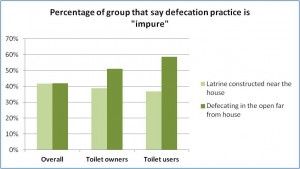 In the context of knowing that Muslims are much more likely to both own and use a latrine, we see a clear possibility. Ideas of purity and the cleanliness of latrines are cultural notions that appear to be holding back progress in eliminating open defecation for a majority of rural Indians. 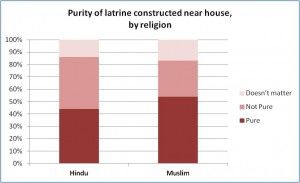 These graphs tell us that it is going to be important both to convince people of the detrimental impacts of open defecation, and that there is nothing bad or dirty about latrines. How cultural perceptions shape these beliefs is something we need to examine more deeply. If indeed cultural forces are influencing sanitation outcomes, we need to develop a better understanding of them so that they can be fully incorporated in the design of government sanitation policy.