No shame in a simple pit latrine

Yesterday was my last day with the team in Rewari, Haryana. Sangita, Nikhil, Nidhi and I had finished up collecting qualitative data to try to understand latrine adoption in the last 10 years. Thanks to our friendly respondents, many of whom were willing to have their interviews recorded, we have lots of interesting findings about latrine adoption and use, and some really fun quotations. But the findings of the “switching study” in Haryana will have to wait for another day.

Today I just want to take a couple of minutes to share a short story about a modest pit latrine. Amit from Arelia (there are two Amits on our team, so we call them Arelia wala Amit and Nalanda wala Amit – Amit from Arelia and Amit from Nalanda) and I were doing an interview for the quantitative survey with an older man in Rewari block. He answered our questions kindly and patiently, but when we got to the section in which Amit was supposed to observe the man’s latrine, the man said it not at the house (it is common in Rewari for people to built latrines on the plot of land where they keep their animals). I told Amit to finish the interview and that we’d fill in that section later. When we finished the interview, we again asked to see the latrine, asking whether there was a child from the house who could take us to the plot. The man looked uncomfortable and said that that would not work. We suggested we could find our way ourselves, and he said no, so we gave up.

Later, when I was reviewing the survey forms in the car, Amit told me that on his way back past the house, the man’s grandson, who was about 20, stopped him. They talked for a bit about the survey, and the grandson asked Amit if he wanted to see the latrine. It turned out that the old man was ashamed of his latrine, which was why he had not wanted to take Amit to see it.

Why would the older man be ashamed of his latrine in a place where so many people practice open defecation? Well, in Haryana, people tend to build extremely fancy latrines, or none at all. The fancy latrines have water seals that prevent bad smells and in many cases flush tanks – we even saw latrines equipped with both a western toilet seat and an Indian one. Here is a photo of one of the fancy latrines from the switching study.

The man who we interviewed had built a perfectly serviceable but, for Haryana, relatively simple pit latrine. It consisted of a hole lined with cement rings, with a cement slab and an Indian seat placed over the hole. He’d built a brick structure, only about 4 feet high, around the seat, and used a plastic tarp as the roof. Though I did not see the latrine myself, from what Amit described it would have looked something like the simple pit latrines we saw all over Bangladesh. I couldn't find any pictures from Bangladesh with brick superstructures--they tend to use tin--but this will give you an idea of the difference in fanciness between the latrines that the old man may have seen, and the one that he built for his family. 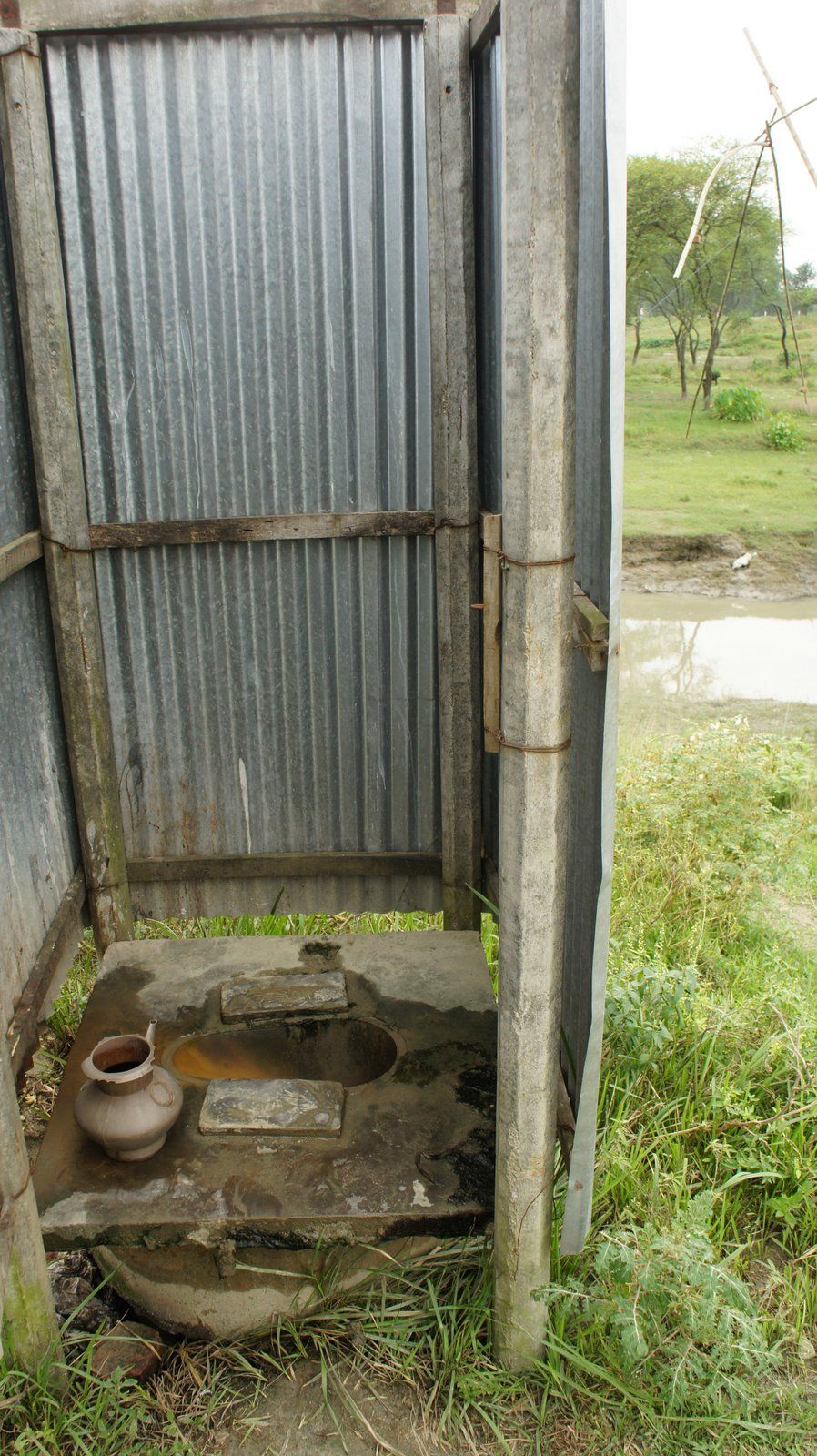 What the old man didn’t know is that I would have been THRILLED to see this simple pit latrine. You see, most people in rural India are not going to be able to afford to build the fancy toilets that you see in the top picture, and that many people in Haryana have been able to build thanks to the state’s incredible recent economic progress. If people in other parts of rural India are going to end the practice of open defecation, they will need more makeshift and lower cost solutions, like the one that this man had built for his family.