Nikhil and Sangita on NDTV, discussing the Swacch Bharat Mission

Just two days ago, award winning journalist Sreenivasan Jain and Manas Roshan of NDTV did a story on the Swachh Bharat Mission as part of their investigative show, Truth Versus Hype.  You can watch the show here.

The show was quite remarkable. For the first time on national television, someone said that they do not like government toilets because they thought that their pits were too small (3:34 minutes into the show). They also said that the pits, according to them, would fill up in a month or two. As those who have followed r.i.c.e. research on perceptions of toilets in rural India know, this is just not true. The Indian government actually builds nice toilets (if there is no corruption, that is) which meet WHO requirements for pit size, and these pits would last a family of 5 more than 5 years.  The world over, people use these pit latrines, saving themselves and others from disease and death. As the culture and sanitation paper shows,  rural Indians think that these pits are too small for their use because they are anxious that they will have to empty the pits once they fill up. Feces are considered ritually polluting, and dealing with feces is considered to be the job of the lowest castes. Many people in rural India consider manually emptying a pit latrine to be extremely degrading. In order to avoid this issue altogether, rural households aspire to build latrine pits that are big enough to last a generation. Rural Indians prefer not to use government latrines, because these pits require periodic emptying. The show was also remarkable in that it was able to cut through the hype around the Swachh Bharat Mission and show the truth that in reality, Swachh Bharat Mission is more or less similar to the UPA's Nirmal Bharat Abhiyan. It may even be worse, because it cuts spending for IEC (information, education, communication) activities, from 15% of the program's total expenditure to just 8% of the program's expenditure. One part that we have some reservations about is the show's portrayal of a success story in Bikaner, Rajasthan. We would really love to see a success story, but our experience in Rajasthan shows that in success story districts such as Churu and Bikaner, people build latrines with very large pits, requiring a substantial financial investment from families. What is also alarming is the use of patriarchy, as shown in the show, to promote toilets in rural Rajasthan. Rural Rajasthan, especially the desert parts of Rajasthan can be extremely patriarchal, where women are supposed to remain in the house and practice ghoonghat, covering the head and face with a veil. Indeed, evidence from the India Human Development Survey 2004-05 corroborates this: in Rajasthan, 94% of women said that they practice ghoonghat or purdah, the highest in India. The proportion of women practicing ghoonghat in Rajasthan is much higher than the all India practice: 55% of women in India said that they practice ghoonghat (Table A.10.5a). Despite this, or perhaps because of this, the state government of Rajasthan actively promotes the construction of toilets using women’s ghoonghat as a tool: 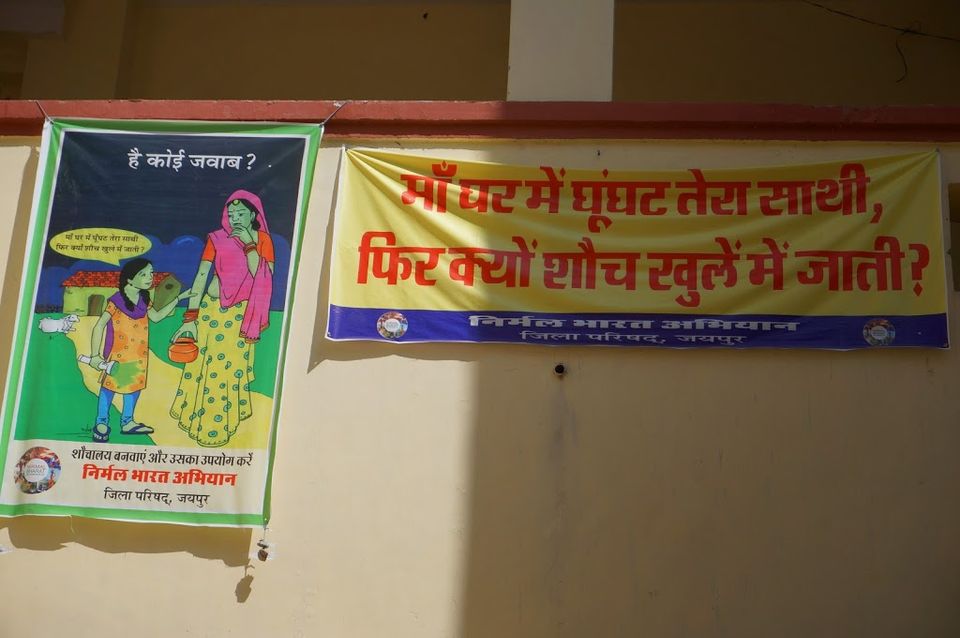 In a patriarchal rural society, messages like these are often counterproductive – they sanction regressive social practices that involve the subordination of women, and they also harm the usage of toilets by men. Toilets become something that women use, not men. These messages also reinforce the notion that women should remain within the ghoonghat and within the chaar-diwari (four walls) of the house. Surely, it would be possible to promote the use of toilets and promote health in India without the use and promotion of regressive social practices?