Milk and babies seem like things that go together. It turns out that many rural Indian moms think so too. Here is a graph of the fraction of rural infants under 1 year of age who were fed cow’s milk in the day before their moms were surveyed by the National Family Health Survey (NFHS). (The fraction of infants getting cow’s milk may have declined in the two surveys shown, but it’s hard to tell if that’s real since the survey changed the way it asked the questions.) About half of infants are drinking cow’s milk by the time they are a year old. 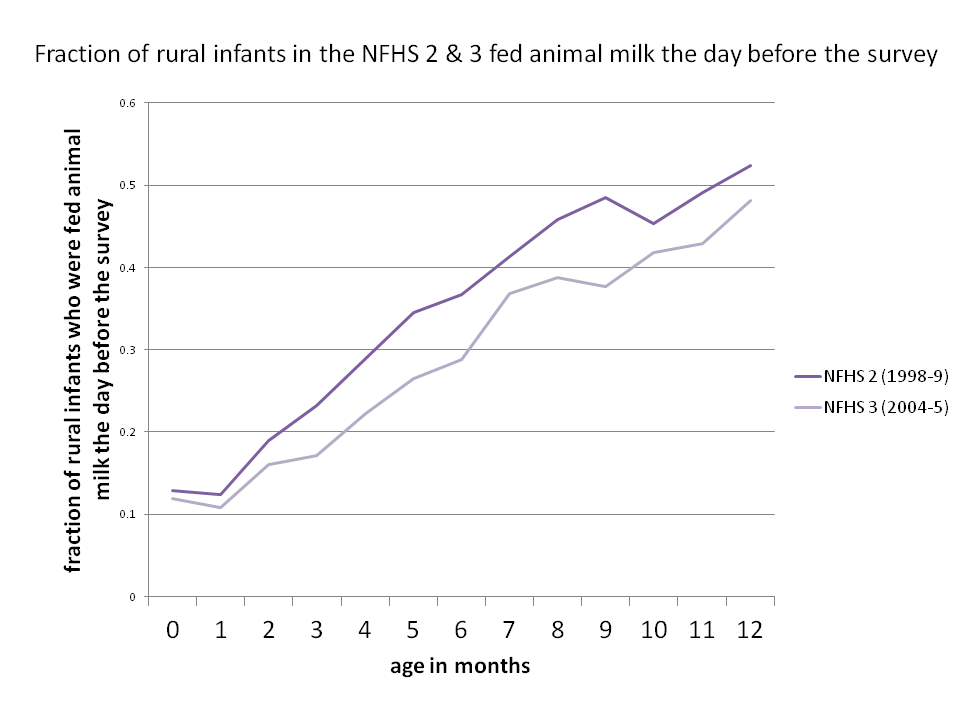 In Sitapur, lots of moms that I spent time with supplemented their babies’ diets with cow’s milk: 8 of the 15 babies were getting cow’s milk before 7 months, although two of these babies died before they reached seven months. Some moms said they didn’t have enough breast milk, one said her milk made her child sick, and another said that she was spooked by a spirit, which took away her milk. A couple of moms reported that their milk dried up after they started introducing cow’s milk. Moms also spent quite a bit of money on milk, and the ones who had cows or buffaloes at home gave up the opportunity to sell the milk, or drink it themselves.

It’s tough to know whether this practice is a good idea. The World Health Organization recommends that babies be exclusively breastfed (no animal milk, no water, nothing other than breastmilk) until 6 months of age. After that, they should be introduced to complementary foods such as grains, fruits and animal proteins. The American Academy of Pediatrics does not recommend feeding infants cow’s milk before one year of age.

Is the practice of feeding babies cow’s milk a bad thing? If bottles are improperly cleaned or prepared, they might expose babies to extra pathogens that give them diarrheal infections. But then again, maybe babies are going to get similar exposure to environmental pathogens anyway. (I tend to think not, but it’s possible.) Moms almost always add water to the milk, which makes it more digestible, but also cuts down on the nutritional content. Despite the poor nutritional content of watered down cow’s milk, it is important to note that rural Indian moms introduce complementary foods very late; only 44% of 6 month olds in the NFHS 3 are fed solid or semi-solid foods, and 8% of 12 month olds are not fed solid or semi-solid foods. Does cow’s milk provide calories that babies wouldn’t otherwise be getting? What about the relationship between cow’s milk and breastfeeding? Lots of the moms in Sitapur thought that they didn’t produce enough breast milk to satisfy their babies: if they didn’t feed cow’s milk, they said, the babies would cry and cry. But breastfeeding advocates say that introducing non-breast milks leads to reduced breast milk production due to less demand from the baby.

The evidence seems to point strongly in the direction cow’s milk being a bad thing for infants. Considering that so many mothers do it, it may be an important topic for early life health and nutrition programs to address head on. But as far as I can tell, there have been no focused studies of the relationship between cow’s milk and growth and why mothers introduce cow’s milk. What do you think such a study might find?