Many people don't know that latrine use is good for health

In light of the recent New York Times article highlighting r.i.c.e.’s research on the importance of sanitation for health, quite a few people have asked me how this can be considered an emerging issue. While it may seem obvious to many of us that open defecation must be bad for health, especially the health of children, what we found in the SQUAT data is that this connection is not at all obvious to many people living in rural north India.

In the spirit of chart month, below are a few pie charts that demonstrate this point quite clearly. In the SQUAT survey, we read a list of several changes to respondents, and asked them to tell us if they thought those changes would improve health or not as a result.

Over 97% of respondents in our survey believe that having a hospital nearby would improve health. In terms of personal behaviors, over 98% believe that a person’s health would be improved if they stop chewing tobacco, stop smoking, or stop consuming alcohol. Messages about the detrimental impacts of these behaviors seem to have been successfully communicated, and thus their connection to health is widely known. On the other hand, less than 70% of individuals believe that defecating in a latrine would improve health. 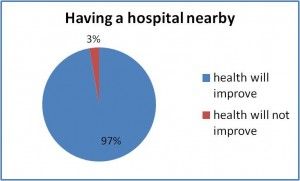 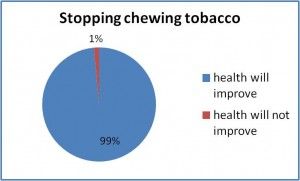 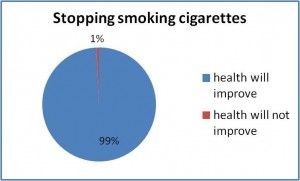 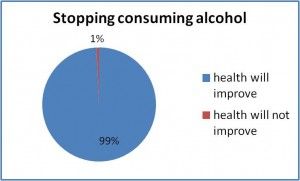 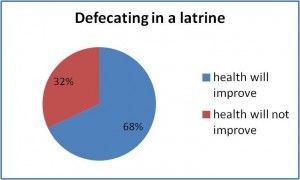 In fact, when asked directly about which is better for health, 43% of all respondents stated that open defecation is no worse for child health than latrine use. Even worse in terms of the challenge that lies ahead, 51% of respondents who defecate in the open report that defecating in the open would be at least as good for child health as everyone in the village using a latrine.

Part of the problem is that there is insufficient communication around latrines generally, as many people don’t remember hearing or seeing messages about latrine use: only 31% of respondents said that they had seen a poster, wall-painting, pamphlet, street play, or film about using latrines. Plus, communication that has occurred, at least in terms of the health impacts of open defecation, does not appear to be very effective: when asked why children get diarrhea, only 26% of respondents answered in a way that reflects an understanding of how it may be caused through infection, bacteria, not washing hands, or defecating in the open. Given that diarrhea is a very visible outcome, it’s even less likely that people understand the longer-term impacts of open defecation in terms of physical and cognitive stunting, poorer school outcomes, diminished adult productivity, and higher risk of infection and mortality.

It’s clear that people are just not used to thinking about toilets in terms of health. While we don’t know exactly which messages will motivate people to want to use latrines, this lack of awareness that open defecation is a threat to health is just one of the many reasons that latrine use is not a priority to many people in rural India.

How can we move the latrine use pie chart to be all blue like the rest? We’re advocating for all hands on deck – every individual throughout India needs to know how deeply harmful open defecation is for their own health and the health of those around them.