Is Some Vaccine Worse than None? The Rubella Vaccine Threshold Effect

Is Some Vaccine Worse than None?: The Rubella Vaccine Threshold Effect

The issue:Vaccines are the most effective tools to defend against viral infection. Diseases that use to be common causes of illnesses and deaths around the world, such as smallpox, measles, diphtheria, pertussis, influenza, and Haemophilus influenzae type b (Hib) and rubella can be prevented via vaccines and as a result have either been eradicated (smallpox), or have been tremendously reduced over the past century. For example, rubella, a disease that, when contracted by pregnant women, can result in death of the fetus or birth defects in the infant, has been eliminated in the Americas since 2009 and has decreased substantially in Europe.1, 2

Therefore, when India’s Ministry of Health announced in 2014 that they plan to introduce rubella-containing vaccine (RCV) into their national measles routine childhood immunization program,3, 4 at first glance this seemed like a great and straight forward public health intervention.  It might save a lot of children from being born with birth defects: it is estimated that 110,000 infants (95% CI 14,000 – 308,000) are born each year with congenital rubella syndrome.5   The rubella vaccine is safe and effective - 95-100% of susceptible individuals over a year old develop rubella anti-bodies, which protect them against the disease, after one dose.  Rubella vaccine is also easily combined into measles vaccine and is cost-effective; moving from measles to measles-rubella vaccine costs an additional 0.30 USD per dose.

If India successfully introduces the rubella vaccine than given the size of population, decreases in CRS cases in India will result in large reductions of CRS globally. However, unlike for other diseases, the benefit of the vaccine depends completely on reaching a critical threshold of vaccination coverage (the proportion of the population vaccinated). Rubella vaccination coverage at inadequate levels can actually result in transient increased risk of birth defects. So, the question of how helpful the introduction of the rubella vaccine in India will be depends on whether vaccines can be delivered to enough children.

Background on the rubella vaccination threshold:Rubella is generally a mild childhood disease, but infection during early pregnancy may cause fetal death, spontaneous abortion, or the birth of an infant with birth defects caused by congenital rubella syndrome (CRS).6  Low-level vaccination coverage can increase the average age of infection while still allowing rubella to circulate in the population. This increase in the age of infection may mean that more pregnant women become infected with rubella. Theoretical work has shown that the implementation of RCVs at insufficient vaccination coverage levels may lead to short and long term increases in CRS incidence.7-10 And, empirical evidence from Greece and Costa Rica has demonstrated short term increases in CRS due to inadequate vaccination coverage.  The WHO estimated that the  ‘sufficient’ level of vaccination coverage is 80% coverage among infants prior to 24 months old;6 this estimate differs across populations as it highly dependent on both the population birth rate and the transmissibility of rubella in the population.11

Global Perspective:  The WHO prioritized CRS reduction as a policy directive in 2011.6 They recommended that countries consider including RCV in their national immunization programs if they are already providing two doses of measles vaccines, but have not yet introduced RCV.6 In 2013, the GAVI alliance announced its decision to fund MR (Measles –Rubella) vaccine catch-up campaigns for children ages 9 months to 14 years old.12 Since that time, countries including Rwanda, Cambodia, Senegal, Vietnam, Ghana, Gambia, and Bangladesh, have already launched the GAVI-supported MR catch-up campaigns, and many more countries including India are planning to introduce the vaccine.13

What now?Our work uses mathematical models to explore the effect of introducing RCV into India’s national immunization schedule for each Indian state by rural and urban regions. The model, described here was revised to include India specific input parameters (demographics, and vaccination coverage) to simulate forward the population in the absence and presence of rubella vaccine within the public sector.  Demographic data are accessible from the 2011 Indian census and the Sample Registration System. Given that the rubella vaccine will be added to the measles vaccine, we can use current estimates of measles vaccination coverage from Santanu et al. (2015) to predict what the rubella vaccination coverage will be upon rollout.14 Parts c) and d) of figure 1 show that for most states in India, measles coverage rates are over 80%, but for Uttar Pradesh and Arunachal Pradesh they are as low as 60%.

In addition to birth rate and vaccination coverage level, which are shown by state rural and urban regions in figure 1, rubella transmission dynamics also depends heavily on rubella transmissibility in India. There is little known about rubella transmissibility in India.  Simple estimates reveal that the basic reproductive number for Rubella can range anywhere between 5 and 11, which means that in a fully susceptible population one person with Rubella will on average infect 5 to 11 other individuals with rubella.  The continent of Africa has a wider range of the basic reproductive number (R0) estimates (2-20), however on average R0 is five.15 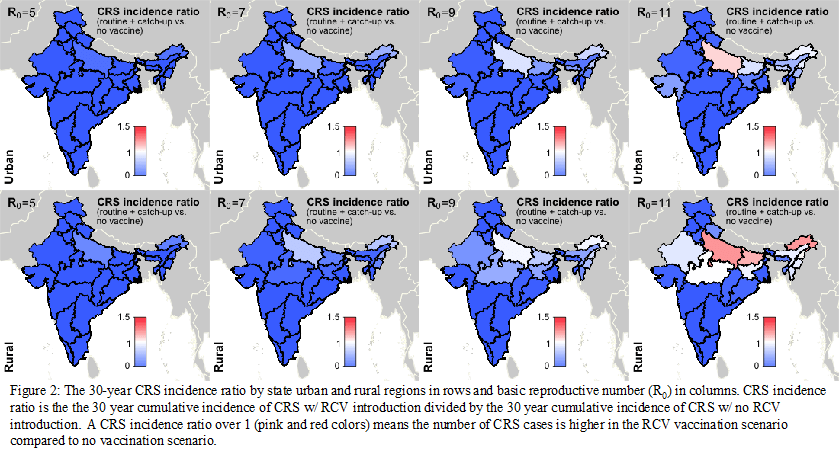 As you can see from Figure 2, assuming R0 ≤ 9, RCV introduction will result in cumulative decrease over 30 years in CRS incidence for all states in India.  However, we should aim higher than simply 30 year cumulative decreases in CRS. Rather, we should aim to prevent rubella outbreaks that can result in short term ‘outbreaks’ in CRS cases, and to maintain public confidence in the rubella vaccination program.  Figure 3 displays the annual CRS incidence ratio between 2016 and 2045 of the simulated models based on a range of the basic reproductive number.  Figure 3 shows that if R0 ≥ 7, regions may be at risk of annual increases in CRS even if 30-year cumulative number of CRS cases decreases.  Specifically, states with the lowest vaccination coverage rates, i.e. Uttar Pradesh, Bihar, and the northeast will be at largest risk of transient CRS ‘outbreaks.’

Figure 3: Annual CRS incidence ratio between 2016 and 2045 by state rural and urban regions in rows and R0 is columns.

These results provide a generally optimistic view of the introduction of the rubella vaccine in India; the rubella vaccine will likely result in cumulative decreases in CRS.  However, an investment in rubella surveillance will be vital to monitor the success and possible failures of the vaccination programs to prevent rubella outbreaks that can result in annual increases in CRS. To this point, population-based serological surveys of rubella, improved CRS surveillance and fever/rash measles and rubella surveillance can be used to estimate population immunity, evaluate the effectiveness of previous vaccine control efforts at reducing population susceptibility, and evaluate the need to Supplementary Immunization Activities (SIAs). Additionally, India must maintain a readiness and flexibility to administer supplementary immunization activities (SIAs), specifically in states highlighted above with low vaccination coverage.

If you have questions on what you've read, Amy would be happy to answer them at awinter [at] princeton [dot] edu.

7.   Anderson RM, Grenfell BT; Quantitative Investigations of Different Vaccination Policies for the Control of Congenital-Rubella Syndrome (Crs) in the United-Kingdom. Journal of Hygiene 1986;96(2):305-333.