Regular readers of our blog will know that we talk a lot about heights and weights. This is because in a resource scarce setting, body size is a useful way of telling how well off people are. Especially in a poor population like India, height is a good marker of long term health, cognitive ability and longevity. Among children especially (but adults too), being underweight is a clear sign of acute lack of food and of disease. But how short is too short? How thin is too thin? And how many people in India are too short and too thin?

Most of the data that we have about body size in India comes from children. That makes sense because children’s body size is more malleable than that of adults. By looking at children, we can see more quickly how changes in a population’s circumstances are influencing body size.

Over the next couple of days, I’d like to get into how it is that we know that Indian children are "too small" and to paint a picture of just how short and thin children in India are.

From 1997 – 2003, the World Health Organization (WHO) ran the Multicentre Growth Reference Study in order to provide researchers with an appropriate reference population with which to study population health around the world. The WHO collected information on how children from six countries (Brazil, Ghana, India, Norway, Oman and the USA) grew, which means that they repeatedly measured children from birth to age five.

While the children were from different countries and cultural backgrounds, what they had in common was that they were fed and cared for impeccably – the WHO only chose families who would comply with their guidelines for raising children, including exclusive breastfeeding in the first months, healthy supplementary food thereafter, full vaccination and treatment of children’s illnesses. The result of the WHO's efforts was a set of growth reference charts that showed how tall and heavy the well-cared for children are at different ages.

Armed with this knowledge of growth references and z-scores, let’s look at the body sizes of children in India. The graph below uses data from the National Family Health Survey (NFHS), a representative survey of India conducted in 2005-6. It plots the age of children in months on the x-axis against the average z-score of children that age. As a reminder, the z-score gives us an idea of much shorter the mean child in India is than children in the reference population. 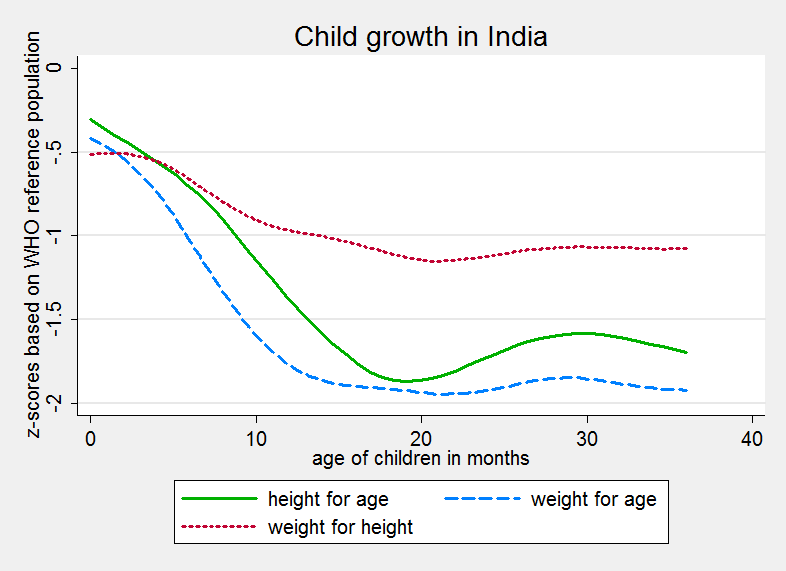 But of course, the graph above only shows what is going on for the average Indian child. Tomorrow, I’ll post a box plot with the same data—to help show how body sizes at different ages vary.