From early February to late March, I was spending time in villages near our house in Sitapur, trying to think about factors contributing to the small body sizes of Indian children.

I chose three villages within bicycling distance, and for two months, I spent one day each week in each of them. When I was there, I spent time with women who were in the late stages of pregnancy and who were caring for babies less than two months old.

Each week, I weighed the babies and women and tried to get a sense of what their home life was like. I watched, and sometimes helped them work, held the babies, and talked with the women about what they ate, how they took care of their children, and what their pregnancies and childbirth experiences were like.

The graph below shows six babies’ weights for age over the study period. For this graph I chose to show weight, rather than height, because it fluctuates more over a short period. (The babies in the graph were picked for the purpose of talking about them in the blog post; they are not representative of my little sample.) 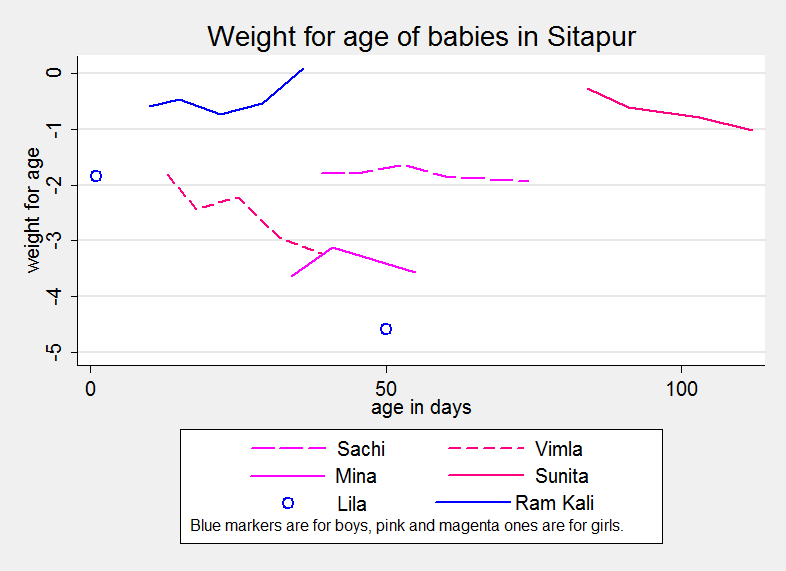 I’ve labeled each of the babies’ growth curves by their mother’s names (changed for confidentiality), because women in Sitapur tend not to give babies names until they are older, and will likely survive.

The graph shows the growth trajectories of six babies. Two babies, Ram Kali’s son, and Sunita’s daughter seemed to be doing well. Compared to other babies in Sitapur, they were large for their age. Ram Kali’s son even improved his weight for age over the study period. As you will recall from the picture of falling average z-scores, this is fairly uncommon.

I don’t know for sure ideas why these babies did so much better than the others, their houses were no cleaner and their families were no richer. Both of their mothers, however, were not as thin as many of the others, and breastfed frequently.

Sachi’s daughter, in the middle of the graph, is a baby who seemed to be doing OK compared to the other babies in the sample. She was neither the biggest nor the smallest, and as you can see from her flat weight for age line, she neither stopped growing nor had any major growth spurts. A few weeks into the study, I compared the babies’ sizes to reference population for the first time. I was surprised to learn that Sachi’s baby, and a couple of others who I thought were doing OK, actually had z-scores of -2. In Sitapur, they look normal, but they are very small by reference standards.

Each week, when I went to visit the babies, there were three in particular about whom I worried. Vimla’s baby, Mina’s baby, and Lila’s baby were much smaller than the rest, and were gaining very little weight.

As you may know from a previous post, I weighed Lila’s baby the day after he was born, and found that he was at the cut-off for low birth weight, 2.5 kgs, or about 5.5 lbs. After that, Lila was happy to have me visit them, but asked me not to weigh him because she thought repeated weighing might make him sick. So, over the seven weeks that I got to know them, I could see that he was not gaining weight properly, but I didn’t know how bad things were until the day before I was about to leave to visit the US, when Lila said that I could weigh him again. It turned out that he had gone from a z-score of-2 to a z-score of -4.25. He had gained only 200 grams, or less than a half of a pound, in the 7 weeks since his birth.

Vimla’s baby, a little girl, was only about nine days old when I met her. She seemed thin to begin with, but as time went on she gained less and less weight, and her mother started to feed her cow’s milk in addition to breastmilk. Vimla worried about how small she was, and took her to a doctor. She often waved pieces of roti-dough over the baby to keep evil spirits away.

Mina’s daughter was not drinking breastmilk when I met her. She was about a month old. Her family said she vomited breastmilk violently, and they’d taken her to a traditional healer as well as the district hospital. Now, she drinks only cow’s milk. I was fairly worried that the combination of possible disease from bottle feeding and inadequate nutrition from the cow’s milk would compromise her health, but at one point, she did start to gain weight. Then, the week after she began to gain weight, her uncle died in a motorcycle accident. The family was in mourning. After that, Mina’s daughter stopped growing again.

I am guessing that the babies like Sachi’s will probably survive, despite the damage they may suffer from being stunted and underweight as children. Statistically, Ram Kali’s and Sunita’s babies will be better off as adults because of their relatively successful growth as children.

I think often about Lila’s, Vimla’s and Mina’s babies these days. At what point are babies so small, and growing so poorly, that they are unlikely to survive? Will they be there when I get back? How small is too small?