Today we have a guest post from our wonderful colleague/guide/interpreter in Bangladesh, Zubair Karim. Zubair, thanks so much for your perspective and for all of your help on the trip! It really would not have been nearly as successful without you.

When rice visited Bangladesh last month, to collect information on how Bangladesh managed to reduce open defecation to a bare minimum all across the country, I was contacted to be their local translator/interpreter for the field trips. During our field trips, we visited many upazilas (i.e. sub-districts)in the northern belt of Bangladesh ranging from Rajshahi to Habiganj via Mymensing and Kishorganj.

These field trips with rice were a real eye opener for me and it was fascinating to gain an insight into the minds of the poor rural people in terms of their desire for hygienic latrines. Born and bred in the bustling city of Dhaka, and coming from a reasonably comfortable background, I cannot remember a time when I ever gave the very human act of relieving oneself in a safe environment any extra thought. I always took it for granted, like the air I breathe or the water I drink. But coming here, and talking to the people, really talking to them, asking them about their hopes and dreams, it was clear what owning a latrine symbolized. 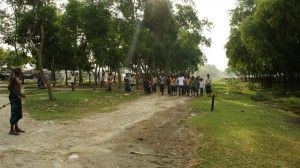 It was a humbling experience too. I have always known on a slightly superficial level what living below the poverty lines means – I have interacted with sufficient rickshaw pullers, day laborers and beggars to know of their ceaseless everyday struggles to make ends meet. But there is something infinitely sad about talking to people who view the basic human right of having access to a sanitary latrine as a luxury, as an aspiration. If nothing else, I have learnt to appreciate things in my life a little bit more than I normally would. 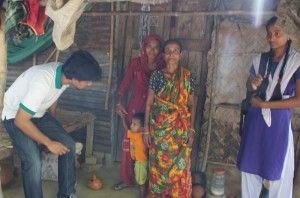 This 7-day trip provided me with an overview of the whole value chain in the hygienic latrine sector- starting from end users (generally poor rural households) to local latrine producers to sweepers to relevant government line agencies and the private sector. It was quite intriguing to learn about the massive unmet demand in this sector, and how latrine production has the potentiality to be turned into a profitable business for those involved in the production and distribution.

Working with the team has been an absolutely fantastic experience for me. Truth be told, I had certain preconceived notions of how consultants from developed countries would react to certain realities of a developing economy, especially in a rural setting. But it was frankly astonishing how the team took everything in their stride and had this innate quality of adaptability which at times made me feel like a stranger in my own country.

One of the key things that I will take away from this trip is a great lesson on conducting qualitative research. We followed the lead, and kept digging till we came to the heart of the issues we had come to investigate.

It was fun, it was eventful, and even though it was a work trip, I had such a great time it didn’t feel like work at all! 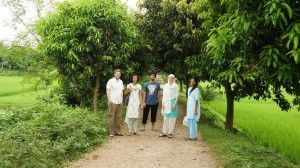 We miss Bangladesh too, Zubair![/caption]