Does the IEC messaging on sanitation needs to change?

The government of India over the years has focused on latrine construction and its spending on behavioral change in the form of Information and Educations Campaigns (IEC) has been minuscule. Infact, the IEC spending between financial year 2013-14 were just 209 cr in comparison to 2518 cr spent on construction. 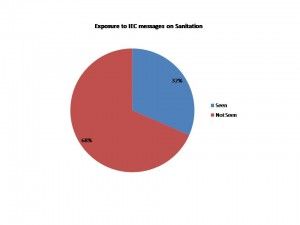 The results of this lack of IEC spending and its non effectiveness can be seen clearly in the SQUAT data. In the SQUAT Survey, we asked people if they have ever heard or seen any messages on sanitation (in the form of wall paintings, street plays, fliers, posters, short films, etc). In figure 1, among all the people who participated in our survey, only 32% of the respondents had seen some form of sanitation message, and a majority of respondents (68%) had never seen one. 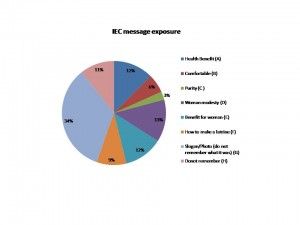 Among the people who had seen IEC messages, we asked about the content of the message and.43% of the respondents (G+H) either said they remember it being some slogan or photo but do not remember what the slogan/photo was about or they do not remember the content at all. Another 25% (D+E) said that the message promoted latrines as enabling women’s modesty or as being beneficial to woman in some form. Only 12% of the respondents in the survey had been exposure to a correct message on the health benefits of latrine use.

These graphs not only point to the importance of increasing IEC spending on sanitation, they also highlight an important issue regarding the content of these messages. It’s important for the government to think seriously about what these messages contain because promoting some themes may actually do more harm than good. For instance, the IEC message focusing on women re-enforces gender inequality, endorses restricted mobility of woman in rural areas, and also distracts from the important message that everyone needs to use a latrine. The answer may not just be to advertise the health benefits of latrine use and so we need to do lots of experimentation.