I wondered whether it would be possible to find this relationship within India as well. In order to do the same exercise with Indian data, I would have to find mortality rates from when adult women alive today were young. Luckily, in 1970, the Indian government started a special program to collect vital statistics about its population, called the Sample Registration System. Vital statistics, which are information about births, deaths, and marriages in a population, were collected for the larger states every year.

I went to look for data from the Sample Registration System in the bowels of the Office of Population Research’s amazing population library. I was lucky enough to find big, heavy books, with tables of infant mortality rates from the 1970s and 1980s collected through the Sample Registration System. (As an aside, a few months ago, I wrote a blog post about the importance of administrative record keeping. The work I’ve been doing in the last couple of weeks makes me want to singing the praises of good record keeping even louder!)

When I entered the data on infant mortality rates into the computer and compared it to adult heights in the relevant states and years, I found that there was indeed a negative relationship. The graph below shows this relationship. 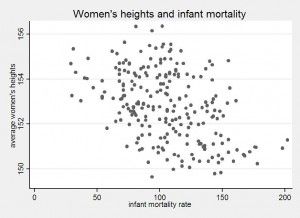 This analysis is only a starting point for understanding what leads to variation in adult heights. It looks, at this point at least, that mortality in the first month of life is more closely associated with adult height than post neonatal mortality. If true, this would be a departure from the findings from western Europe and the US. I’ll keep you posted as I keep working with these data.