Happy Valentine’s Day! This is a holiday that doesn’t really exist here in conservative, rural Uttar Pradesh. I was able to find a Valentine’s card in Lucknow last week, when I was visiting the state UNICEF office.The holiday was an only slightly bigger deal in Kutch, in Gujarat: one restaurant – optimistically called “U.S. Pizza” – painted a window in celebration.

Diane and I celebrated our first married Valentine’s Day by heading out at 7:30 this morning to meet the Pradhan of a nearby village. On our pair of bicycles, we pedaled about six miles in the direction away from the district capital – passing a wall painted with a standard government design promoting hand washing – to get to the largish village.We waited outside the Pradhan’s house, where everybody had gathered to celebrate a recent engagement.Eventually a young man in a puffy winter coat made his way through the crowd… our Pradhan. 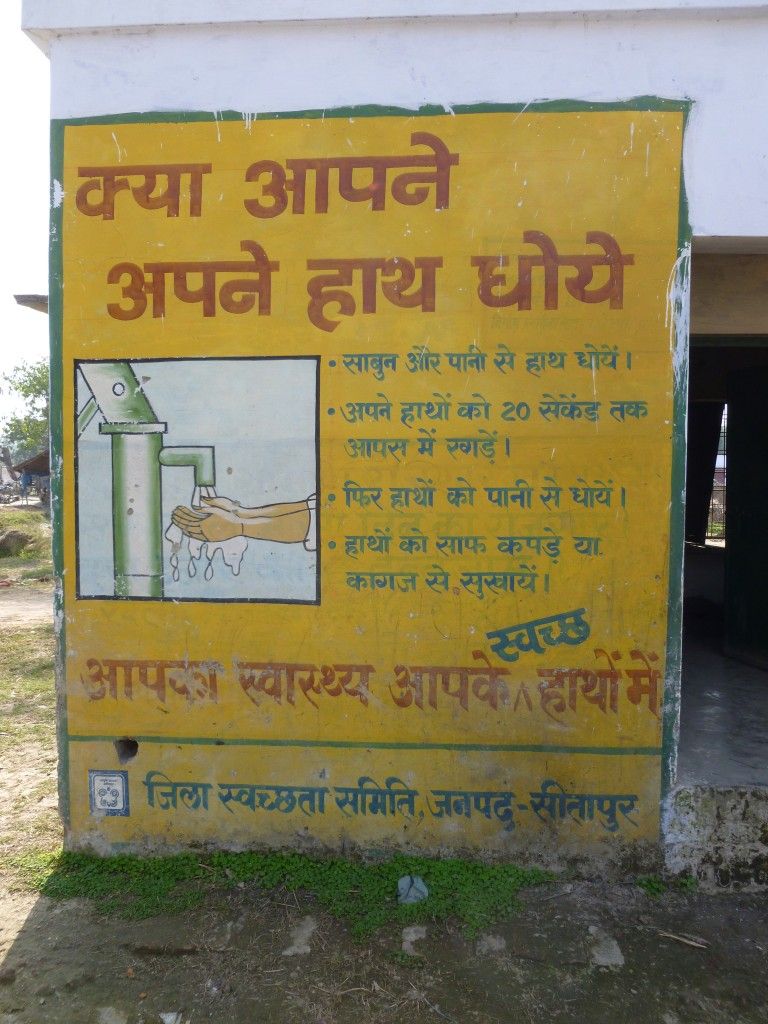 We saw this exact same standard government mural on the way to our village today, but this picture was taken in another village.[/caption]

As we drank chai with him and a smoky fire smoldered out, we started talking about the village. I was interested to know what he knew about the clean village prize, and whether he had tried to win it.On the way in through the village, I had only seen about three latrines: one a very fancy ventilation-improved latrine with a solid superstructure, and another inside a triangular corner made by piling bricks a few precarious feet out from the side of a building.

The Pradhan was happy to explain that in his village, when people had to go some used latrines, but most just “go outside.” But he wasn’t going to talk about a large cash prize in front of the crowd of citizens and engagement party guests, and even if he had, we probably wouldn’t have learned anything.The Pradhan made a big point of announcing that the money from the government would never be enough to build good enough latrines for everybody.So, I asked what he had done as Pradhan, and he told us about a road he had built, with an irrigation ditch.

This was our way out. We asked the Pradhan to take us to see his impressive dirt road – he agreed, and we took off on motorcycles, substantially cutting down on the crowd of spectators.As we strolled down the road and admired the canal, we learned that it had been built through NREGA, and that the surrounding fields were essentially his.So, we found one more case of elite capture of local public goods, but at least people got some NREGA wages.

We brought up the prize again. Yes – he knew about it.He knew some other Pradhan who had won and had gotten to go to Delhi and even received one lakh rupees (this may have just been a round number figure of speech, but many winners are just above the 1,000 population threshold, which would fetch this size of prize).

But he wasn’t very impressed or motivated by the incentive. For one thing, his village was big: over 4,000 people.I checked the census data when we got home, and this turned out to be an exaggeration.Yet, the real population, in the 3,000s, was still far from the 2,000-people cut-point in the incentive.So, his incentive per capita – about 65 rupees – would have been relatively low compared with other villages.

However, the incentive wasn’t the biggest problem. His large village contained several small hamlets, one of which was on the other side of a large creek.Forty years ago, some state or district official had drawn a map badly, and – although our young Pradhan’s grandfather was Pradhan many years ago – almost ever since then, the village government had been in the hands of these minority usurpers on the other side of the creek.Winning the prize would require all hamlets to be open defecation free, and neither side was ever likely to do anything helpful when somebody from the other side was Pradhan.

We continued ambling down the Pradhan’s road. Perhaps inspired by her teacher, sociologist ethnographer Mitch Duneier, Diane got the Pradhan to confirm (Mitch says “triangulate”) what I had learned from my visit with the District Magistrate the other day. This District Magistrate had taken a big interest in the Total Sanitation Campaign, and had held a series of motivational meetings for all of the district’s Pradhans.Our Pradhan had been there.

But he also knew more scoop about the District Magistrate, which we only learned last night. It’s election time here in Sitapur, and the District Magistrate in the next district over was allegedly caught attending a rally for Mayawati’s party.The central government got word of this (no less than Sonia Gandhi got involved, we heard) and the decision was made yesterday (?) to move the offending DM… into Sitapur, switching places with our sanitation enthusiast.I’m pretty sure our ex-DM had no reason to see it coming: as recently as Friday he was making apparently earnest plans to hang out with me.

Do people here in Sitapur find it depressing to learn that the highest post in the land is assigned as a form of punishment? What’s that other district got that we don’t?Toilets, maybe.And the consequences of the random (forgive me, economists!) hiccups of local politics threaten to keep it that way.