A special birthday present: Toilets in UP

I got exactly what I wanted for my birthday today: this graph! 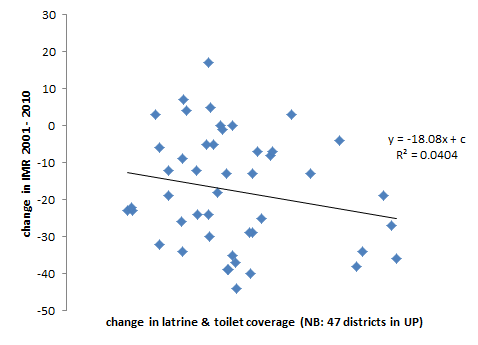 I've been working for a few months now on trying to figure out whether India's Total Sanitation Campaign is improving children's health. While I have been finding generally positive results, one limitation of my study has been that all of my data about how many toilets were built has come from the government data I wrote about a few weeks ago. It would be reassuring to have a measure of how many toilets were built according to somebody other than the person whose job it is to build them.

The only plausible data that I have heard about was collected by UNICEF in 47 districts of Uttar Pradesh. This morning it was waiting for me in my email, sent by my friend Amit in Lucknow. I should be clear: these are my own conclusions, and should not be interpreted or quoted as "UNICEF says", they were just kind enough to share their data. Also, if you haven't been following along, this one graph is, of course, not enough evidence to draw any conclusion about anything in itself. It's a very small sample, and probably a special one. 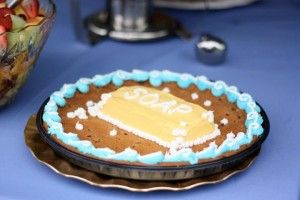 However, as the extra icing on the sanitation-themed cookie cake, I like it very much. It doesn't depend at all on the TSC's own data, and it reaches a very similar conclusion: a baseline standard deviation's (sorry) worth of difference in latrine coverage is associated with a decline in infant mortality of about 2.5 babies per 1,000. That's a very nice birthday present.