A Small Tribute to Uwe Reinhardt

I was greatly saddened to hear about Uwe Reinhardt’s passing on Monday, November 13, 2017.  For those who may not be familiar with him, Uwe was the James Madison Professor of Political Economy and professor of economics and public affairs at Princeton University’s Woodrow Wilson School of Public and International Affairs.  To say the least, he was a well-known health economist who -- for decades -- was active in health care policy in the U.S. and abroad (e.g., Uwe and his wife, May, helped to advise the Taiwanese government for at least 10 years).  If you search “Uwe Reinhardt” on the internet, you will find innumerable articles remembering and honoring Uwe.

I wanted to share a personal note about Uwe.  Between 2011 and 2014, I had the good fortune of being Uwe’s Teaching Assistant on several occasions, and out of his great compassion, Uwe agreed to be on my dissertation committee.  Some of the student offices (where Mike Geruso, John Papp, Dean Spears, and I sat for a few years) were located across the hall from Uwe's office.  To all who are thinking about graduate school, I sincerely hope that you will find a mentor like Uwe, and here are a few attributes to look out for:

(1) Uwe was a scholar who understood, and strove to understand, how the world works in practice. This is no small feat for someone who chooses to focus on health care.  For example, take hospital pricing: the first time that I heard of a hospital chargemaster was in Uwe’s health economics class.  I recommend his 2006 Health Affairs article, “The Pricing Of U.S. Hospital Services: Chaos Behind A Veil Of Secrecy.”  See also his 2003 co-authored article, “It’s the Prices, Stupid: Why The United States Is So Different From Other Countries,” which has more than 500 citations on Google Scholar and was highlighted in a tweet from Sarah Kliff of Vox.com:

(2) Uwe was a teacher who made you laugh so hard during lecture that you felt like you just had a Pilates class rather than Introductory Microeconomics.

(a) One of Uwe’s classic lectures was his illustration of Supply and Demand with the Chinese Marriage Market. A screenshot of the first slide is shown below, and the presentation continues for another 26 slides. 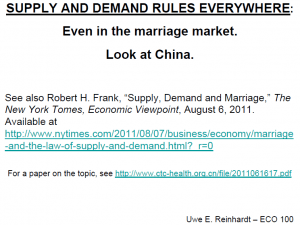 (b) Another Reinhardt special:

(3) Uwe was a mentor who genuinely cared for his students and community. This statement sounds cliché, but I cannot express how much it meant to a struggling graduate student when one of her advisers stopped by her windowless office to chat about his latest trip to Taiwan -- where he had just made recommendations to top officials on how to improve the National Health Insurance program – and shared a box of taro cakes.

For those of us who are lucky enough to have Uwes in our lives, I think that we cannot hope to repay their kindness and generosity.  Instead, we can try to pay it forward to the next generation, and I think that Uwe would be proud.