A ladder of fuels?

75% of all households in India use solid unprocessed fuels—firewood and dung-cake—as cooking fuels. The fuel is burned in inefficient chulhas (burners) in poorly ventilated kitchens resulting in an estimated half a million premature deaths and nearly 500 million cases of sickness every year—mostly to women and young children. Indoor air pollution is the third leading health risk factor in India and causes many more deaths and disease than the outdoor air pollution about which we hear so much more. A switch to cleaner fuels like Kerosene, LPG (liquid petroleum gas) and biogas will save many lives and reduce drudgery and much suffering. Yet the switch is painfully slow to happen. In rural India almost all households (90%)—rich and poor—use these dirty fuels. Even in urban areas, every third family continues to depend on them, at least partially.

Household fuel choice models envision an energy ladder wherein people move from biomass—to coal, charcoal and kerosene—to LPG, natural gas or electricity, as incomes rise and relative fuel prices change. But that does not seem to be happening, at least not in rural India. NSS surveys show only a marginal shift away from firewood and dung-cake over the last two decades, even as overall household consumption has increased and the price of kerosene oil (a much cleaner fuel) at the PDS shops has remained unchanged even in nominal terms.

Why is the transition to cleaner fuels so slow in India and what would accelerate it? My conjecture—I won’t call it a hypothesis—is that this is because women do almost all the cooking in India and as Pranab Bardhan writes in his latest EPW article, India is a country “where women and children are among the most deprived in the usual way a household is run.” I think if the men were to cook, the fuel switching would be much faster at the same income and relative price levels. But this is just a conjecture and one almost impossible to prove. So, let us leave it at that. 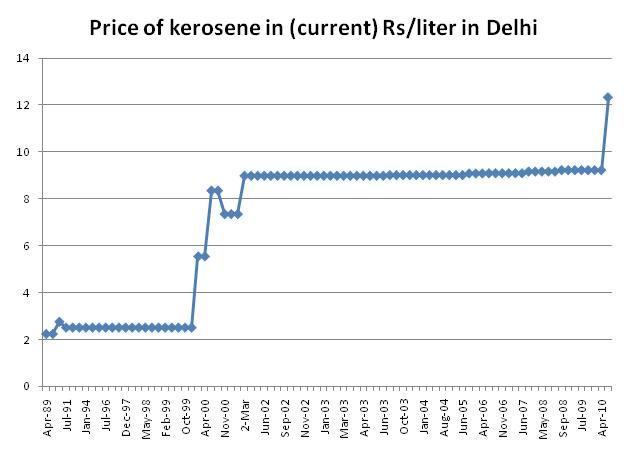 Let us look at the kerosene prices. As the figure shows, the consumer price of kerosene in India is almost completely immune from inflation and oil price shocks which should make it more attractive compared to all other fuels. The heavy subsidy that ensures such low prices of kerosene is worthwhile only if it encourages households to use more kerosene and less firewood and dung. But that does not seem to be happening. Instead, subsidized kerosene is diverted to adulterate diesel and petrol in automobiles. This diversion will only increase with time as diesel and petrol become more expensive while kerosene prices continue to be held down by heavy subsidies. Thus, the subsidy on kerosene—a huge and increasing burden on the taxpayer—not only fails to reduce the indoor air pollution, but also contributes to increased outdoor air pollution through adulteration of automobile fuels.

In the end, I have two empirical questions: first, to what extend does cheaper kerosene lead to reduction in use of firewood and dung-cake as cooking fuels? —An elasticity or cross-elasticity question. Second: given this, what is a better way of providing the subsidy?